The AfroBeatles: Fela meets the Boys from Liverpool

the prequel to The King Meets The President in Africa:

The AfroBeatles: FELA meets the Boys from Liverpool (The Black & White Album)

If Michael Jackson is The King of Pop, and Fela Kuti is The King of Afrobeat, then the Beatles are of course, the Kings of Rock & Roll. Dominating the music industry as a band, composers, performers and activists, The Beatles are icons of Rock & Roll, known as the best band ever. AfroStreet once again takes a bold move into remix/mashup territory bringing masters of entirely unrelated genres together in an epic blend. This time it’s a mashup between Fela and the Beatles’ The Black & White Album. 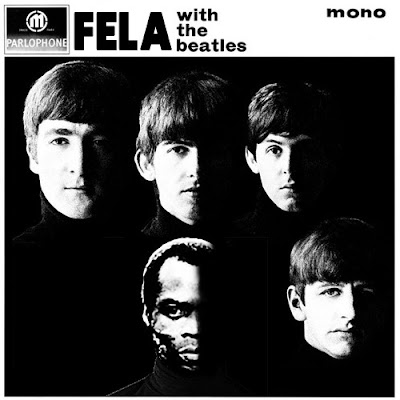 All Together Now
Taxman vs. Upside Down
Yesterday vs. Mr. Grammarticaolgylisationalism Is The Boss
Can’t Buy Me Love vs.Expensive Shit
Come Together vs. Beasts of No Nation
Get Back vs. Colonial Mentality
Revolution vs. Water No Get Enemy
Say Say Say vs. Fefe Naa Efe


Take a few minutes to read the "About" section of the The AfroBeatles below. Content provided by Alicia H. Hines

"It makes sense to me that the evolutionary path of music would lead us to the mashup. Although it weirded me out in the first few seconds, I’ll never forget Natalie Cole’s televised performance of “Unforgettable” with her father Nat King as a ghostly hologram singing beside her. The intersection of music and technology today makes new creative juxtapositions and conversations like that one real, organic, and less freakish."

"The Beatles’ significant contributions to the world of music are praised and adored, fraught with tension and politics, provoke debate, and feed the imaginations of many. The extent of their popularity and global recognition is vast; they too can boast, as their mother country once did that theirs is “the Empire upon which the sun never sets.”

"Nigeria, rich in oil and thick with a labor force, was for a long time, a crown jewel in that Empire. Today it is the most populous country in Africa and the eighth most populous in the world. And while one might say that for certain someone in Nigeria has heard of the Beatles, in Nigeria, everyone, yes everyone knows who Fela Anikulapo Kuti is."

"Although on the surface it may look like one—Black vs. White, Colonizer vs. Colonized, Afrobeat vs. Rock and Roll—this is not a contest, or a battle. And while it certainly isn’t always a lovefest—”Get Back/Colonial Mentality” reminds me of where we really are—these pairings by AfroBeatles, particularly “All Together Now/Ako,” make me hopeful about where we may go."

Alicia is a contributor to TechniColor: Race, Technology, and Everyday Life, and a Dean, and English Professor at The Horace Mann School.
Posted by Papa Chop at Wednesday, January 12, 2011 No comments: