get a taste here:

GET UPDATES HERE and RT for TIX GIVEAWAYS!

HOLIDAY SHAKE IT! AN EVENING WITH URSULA 1000 (ESL MUSIC/NYC)

STILL BUZZIN FROM THE FUNK AID FOR AFRICA BENEFIT WHICH WAS OFF THE HOOK! THANKS TO ALL INVOLVED~ YOU KNOW WHO YOU ARE!

SOUL OF THE BOOT ENTERTAINMENT & STRANGETRIBE PRODUCTIONS ARE PROUD TO PRESENT

HOLIDAY SHAKE IT! AN EVENING WITH URSULA 1000 (ESL MUSIC/NYC) 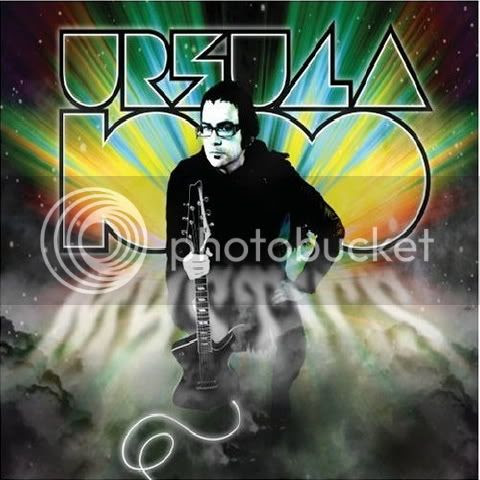 COME GET IT WITH US::

HAVE WE DISAPPOINTED YET?
Posted by Papa Chop at Friday, November 20, 2009 No comments:

Thanks for all that came through and helped us get down right PHUNKY last night at Social! Flyjack and Jaekim killed it! This is why we do it~ for the vibes, people, exercise and LOVE for MUSIC!

Don't get too comfortable because our next event is SAT NOV 14th:: Here's the run~

Soul of the Boot Entertainment
http://www.souloftheboot.blogspot.com

with LIVE PERFORMANCES BY:

A PORTION OF THE PROCEEDS FROM THE DOOR GO TO NEXTAID.ORG

ALL PROCEEDS FROM CD SALES GO DIRECTLY TO NEXTAID.ORG 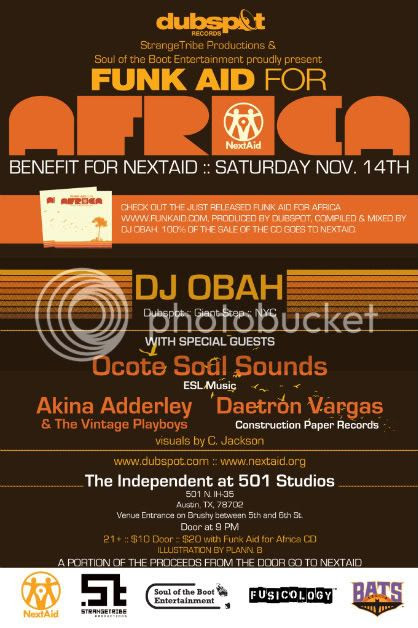 for history of these 2 organizations!

HAVE WE DISAPPOINTED YET?

Next Saturday Nov 7th @ Social Downtown Austin TX :: its gonna be funkier than a hole in your sock:: All killer, no filler and 100% satisfaction guaranteed to put out the bonafide hump’n, thump’n '60s/'70s soul sound. Laying down a groovalicious sound that runs like a '72 Eldorado on high octane...and baby, you know that's powerful stuff! 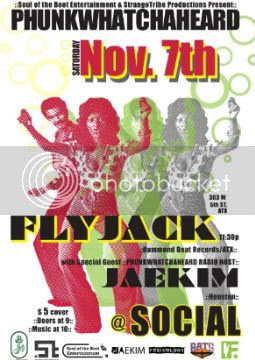 In 2007, the members of respected Austin, Texas funk/jazz outfit Gnappy began tinkering with an experimental side project called FLYJACK. The original idea was to take the old-school funk that had been sampled by hip-hoppers and DJs throughout the 90’s and 2000’s, and forge a band that would play it live. The challenge was simple. While millions of people might know the drum break from “It’s a New Day” by the Skull Snaps because it was sampled by The Prodigy (in “Poison”) and Ol’ Dirty Bastard (In “'Hippa To Da Hoppa'”), how many had heard the original song, or for that matter, heard it live? Better yet, how many knew that the original was better – much better?

FLYJACK quickly became an obsession for founding members Buck McKinney (guitar, vocals), Marcus Cardwell (sax) and Brad Bradburn (bass, vocals), who amassed a collection of rare grooves by scores of little-known groups that had long since faded from popular memory. The more they collected, the more the project expanded - becoming less about hip hop history, and more about the source music itself. FLYJACK was particularly fascinated by the gritty, deep funk created by bands on the outer fringes of popular music – groups like Black Heat, The Soul Seven, The Young Senators, Rhythm Machine and African Music Machine. In fact, the more unsung, the better. In short: the rawest of the raw.

On the Scene: In the summer of 2007 - only weeks after solidifying a line up - FLYJACK took up a weekly residency at legendary East Austin chitlin’ circuit holdover TC’s Lounge, and dug-in. Adding Berklee College of Music graduate Erik Telford on trumpet, Baylor vocal major Alex Felan on vocals and keys, Central Texan Tom Hays on trombone, and Austinite Ed Miles on drums - the group rapidly developed a heavyweight reputation. Wednesdays at TC’s Lounge became a sweaty affair, punctuated by muscular drum breaks, stabbing horns, and a regular group of dancers who nearly stomped the old wooden floor into sawdust. Before long, the word was out, and FLYJACK received an auspicious invitation. In March, 2008, Austin’s legendary Antone’s – “Home of the Blues” – invited FLYJACK to move its residency downtown. The following month, FLYJACK instituted Super Soul Mondays at Antone’s – a weekly funk and soul revue featuring DJs, regular guest acts, and of course, FLYJACK. The night has since become a hub of activity for the nascent soul revival in Austin - attracting a diverse mix of musicians, college kids, tastemaking hipsters and old school fans, while dramatically expanding the opportunity for growth of the Austin funk and soul scene.

Most recently, FLYJACK has been invited to perform at the prestigious 2008 Jazz Aspen Snowmass Festival with Widespread Panic and the New Mastersounds. The group has also shared the stage with DJ Numark (of Jurassic 5) ; instituted a semi-regular boogaloo extravaganza called “Superfly Soul Party” at Austin’s oldest African-American venue, Victory Grill; and performs a monthly soul-jazz set at Austin’s venerable jazz club the Elephant Room.

In the Studio: Of course, for all of its reverence for funk history, FLYJACK always intended to develop its own repertoire. But the group realized it needed to do its homework first. As an exercise, they purposely refrained from writing original material for nearly six months, allowing their instincts to develop and grow. Then, with the force of a breaking dam, the songs began to flow – tight instrumentals such as “Pick Pocket,” “Get Up to Get Down,” “Flyjack Hustler,” and “Weird Harold”, and stone-cold vocal workouts like “Soul Fire,” “Motherload,” “Too Heavy,” and “Serious.” Naturally, the group was tempted to record the songs right away, but here again, they took a studied approach. Rather than rushing in to record their own material, they decided to learn how to make old-school records first.

In April, 2008, FLYJACK entered Austin’s Lava Studios to record a collection of six ultra-obscure funk/soul compositions, including African Music Machine’s “Black Water Gold” and Sir Joe Quarterman’s “So Much Trouble”. Although tracked and mixed in only two days, the band worked hard to recreate the vibe and sound of the late 60’s and early 70’s. The result is a collection of recordings so raw, so heavy, that they sound as if they were pulled-out of a time capsule. Within weeks of release, FLYJACK’s EP made significant waves in the global funk scene – becoming a feature on the popular and influential Craig Charles Funk & Soul Show on BBC Radio in the UK, and gaining traction at Triple-A and Non-Com radio in the U.S. With these accomplishments under its belt, the band enters the studio this fall to begin production of their first full-length record, due for release on respected indie-groove label Hammondbeat Records in early 2009 (www.hammondbeat.com).

It has been a dizzy ride for FLYJACK in the one year since they played their first note - from TC’s Lounge to Antone’s to the Aspen Jazz Festival and beyond; from their crash course in old school rare groove to the development of a dynamite repertoire of original music that may establish FLYJACK as one of the most important funk bands to emerge from Austin in recent years.

Come get it with us::